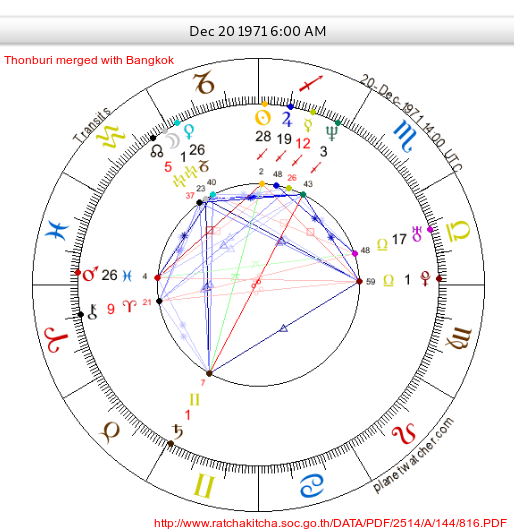 I’m just putting this out there, as a quick search didn’t yield any mundane chart of Bangkok for me, so I did some research.

This chart is based on the time and date when the city of Thonburi was merged into Bangkok, forming what we know today as Bangkok, or Krung Thep Maha Nakhon in Thai. Note that the name Bangkok goes back to the 15th century or even earlier.

I have found this chart to be accurate from a personal perspective. No rectification work has gone into this, and neither have I bothered to set the chart to 12pm Bangkok time (which is customary for mundane astrology charts without a known time).

In particular, note that the Moon might have been either in late Capricorn, separating from a conjunction with Venus, or in early Aquarius, conjoining the North Node.

View all posts by BlueMagician